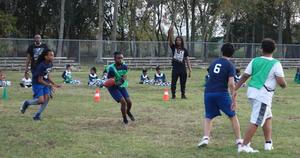 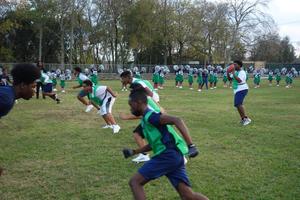 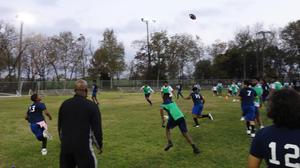 Varnett launched its first flag football game on Thursday, with the Southwest team hosting Northeast in a spirited game that attracted about 100 fans.
Southwest defeated Northeast 28 to 21, and scored an additional touchdown when coaches from both sides agreed to play an abbreviated extra period. However, the game was played for the experience of fun and for students to get a taste of friendly competition.
The contest featured uniformed cheerleaders from the Southwest campus. They cheered their team during the game and provided the half-time entertainment.
The event was an extension of the Varnett experience that has expanded its rigorous academic program to include extracurricular activities.
Many parents from both campuses were on hand to cheer their children on the field.
Hand it to the coaches who prepared these students for the game and gave encouraging instructions throughout.
We look forward to future flag football games as well as other sporting activities in the weeks to come!
Click here for more photos!
Videos:
Southwest coaches address team (green vests) after the game
Northeast coaches address team (blue uniforms) after the game
Southwest scores a touchdown, celebrate
Cheerleaders in action
Competitors line up for sportsmanship
Proud Northeast parent
Published December 13, 2021 Print